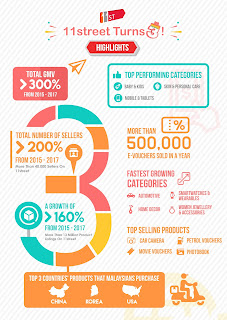 ● 11street achieves over 300 percent growth in terms of its total gross merchandising volume from 2015 to 2017, with more than 13 million product listings from over 40,000 sellers.
● 11street celebrates three years and customers get incredible deals during its birthday party online with prizes and giveaways worth up to RM50,000 in total.


11street (www.11street.my), is celebrating its third birthday this April and they’re commemorating it by giving their customers the best of everything in threes!


Launched in Malaysia in 2015, 11street is now a joint venture between Axiata Digital Services and South Korean e-commerce marketplace provider, SK Planet. As Malaysia’s number two online marketplace, 11street currently has more than 13 million product listings on its platform from over 40,000 sellers.


Hoseok Kim, CEO of 11street shared that over the past three years, the company has seen considerable growth in several facets of its business operations, from its products to its sellers. For instance, from 2015 to 2017, the company saw more than 300 percent growth in total gross merchandising volume (GMV).


“We are thrilled to be celebrating this milestone as we are confident that Malaysia is set to see significant advancement of its e-commerce industry in 2018, and 11street intends to be at the forefront of this industry growth as we continue to meet the needs of Malaysian online shoppers and explore ways to enhance the shoppers’ experience,” said Kim.


11street has also experienced more than 200 percent increase in the total number of sellers registered on its platform, as well as a growth of more than 160 percent in its product listings from 2015 to 2017. The top performing categories include Baby & Kids, Mobile & Tablets and Skin & Personal Care. On top of that, 11street has sold more than 500,000 food & beverage and service e-vouchers in 2017 alone. Of all the purchases made by Malaysians from the platform, the top selling products include the car cameras and photo books as well as movie and petrol vouchers.


Beyond this, 11street’s findings also revealed that in the past three years, more shoppers start to make online purchases for Automotive, Home Décor, Smartwatches & Wearables and Women Jewellery & Accessories. These categories are regarded as the fastest growing categories by the number of orders placed at 11street. Meanwhile, some of the top performing brands are namely Firefly, Laneige, Petronas, Samsung, and Unilever. Besides that, the findings also uncovered the top three countries with the best-selling products, translating into the most number of orders from Malaysian shoppers, which are China, Korea and USA. 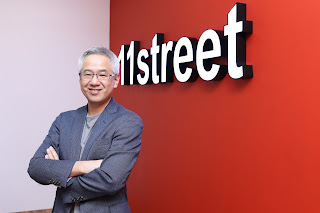 Kim added, “We don’t plan on slowing down any time soon! But, apart from the volume of sellers registered with the online marketplace, the company has been and continues to be dedicated to improving the quality of its sellers through its seller development programs, Seller Zone and the 11street Academy - the nation’s first certified e-commerce certification programme.”


“We’re also grateful to our customers for their continued support and loyalty throughout the years. In 2018, we continue to be committed to enriching the Malaysian daily lives by bringing consumers a wide variety of products from specialty items to everyday necessities, at competitive prices.”


To mark its third birthday and all the milestones that have been achieved thus far, 11street will be sharing its success by offering its customers mind-blowing deals, exciting contests and a whole load of prizes and giveaways worth RM50,000 that are up for grabs.


From the 1st to the 13th of April, 11street is kicking off its Birthday Flash Sales that offers online shoppers products starting from RM3 and to top it all off, the platform is also launching an International Clearance Sale which offers express delivery within 7 days for all featured products from Korea. It might be 11street’s third birthday, but it’s a party for everybody!
Posted by Sherry at 10:35 PM No comments: