10,000 participants in Great Eastern Genting King of the Mountain 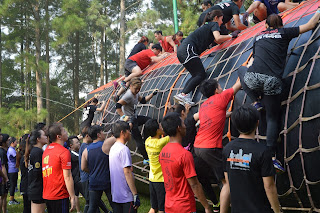 Last Saturday it was a day where my classmate and me had gone to RWG. Do you know that they are ten thousand people signed up for the obstacle course event that is Great Eastern Genting King of the Mountain but hundreds more joined in for the camaraderie of the day? There was no doubt the event held at The Ranch @ Gohtong Jaya recently was a huge success.

Not only was the number of participants bigger than last year's 8,500; the event that inspired togetherness was a heartwarming picture of people in solidarity while in the pursuit of a healthy lifestyle. The air was thick with excitement, and the participants that gathered in teams were visually striking, each team with their very own theme colour in terms of racing outfits.

Evidently raring to go, the participants nevertheless had time for picture taking. They were cheered on by a crowd of enthusiastic onlookers at the starting line where participants were flagged off every half an hour by the deejay in charge.


Dato Koh Yaw Hui, the Director and Chief Executive Officer of Great Eastern Life, summed up the event perfectly: “In fulfilling Great Eastern's brand aspirations as a life insurance company, we hope to inspire Malaysians to live healthier, better and longer. As the title sponsor for Great Eastern Viper Challenge 2016, we recognise how the challenging obstacle course can motivate everyone, especially our youth, to adopt a healthier lifestyle in every way—physically and mentally.

“The event not only promotes a well-balanced and holistic idea of good health but also emotional wellness to foster camaraderie and teamwork.”

This is the second year running that Resorts World Genting was involved with the King of the Mountain event along with Viper Challenge. Kevin Tann, Vice President of Promotions & Entertainment of Resorts World Genting, was understandably happy to be involved in the event, describing it as “arguably the best obstacle course event in Malaysia because it combines great obstacles, good weather and a finishing
festival.”

Tann said, “The fact that tickets were sold out early and we had a bigger number of participants than before shows how urbanites find the event very appealing. It is exercise for the mind, body and spirit; recreation that enhances one's mental, physical and spiritual well-being. And that's because not only
does it promote healthy living; the community spirit it fosters is something we should all be proud of.
“There is surely nothing more positive than families and friends coming together to have fun while getting a good workout and connecting with other people. It is heartening for us at Resorts World
Genting to be part of such a huge community event.”

Best obstacle course event
Like usual, the Viper Challenge this year posed some daunting manmade obstacles but trust the spirited participants to take it all in their stride. They took on the obstacle course that spanned over a 10-kilometre route covering a landscape filled with crooked pathways and rugged terrain. They were tested physically as well as mentally—and how they enjoyed the huffing and puffing!

Obstacles such as Peg Wall and Cargo Net Climb provided the best upper body workout while Rotating Cubes and Water Net Crawl were no less challenging and required good skills and technique.
But the other seemingly less challenging obstacles like Tyre Run were as daunting, requiring the participants to negotiate their way through hundreds of tyres spread out over the ground. It wasn't easy to manoeuvre this obstacle and many stumbled their way through but their excitement was palpable— everybody was having fun.

What do the participants themselves have to say about the event?
Among the multicultural teams that took part was Team Real Steel that included 28-year-old Austin from the US who is hard of hearing. Austin, who has worked for a number of years in Malaysia, had participated in other Viper Challenge events but it was the first time he was involved in one held in Genting Highlands. Austin didn't let his handicap get in the way, describing the challenge as “tiring but amazing.”

As befitting a fun event, Team YOLO brought a lot of humour along with them, saying YOLO stands for “You Only Live Once.” Team leader Erica hails from Penang but the team comprises fitness enthusiasts from all over the country—including Johor, Malacca and Pahang.

The team best embodied the spirit of sportsmanship at the event. Clad in yellow T-shirts, the team members never ceased actively motivating each other with chants. The team work displayed was clear to see and at every obstacle, the group members waited for their team mates to finish before moving on to the next challenge. “We never leave our team mates behind,” was how Erica put it.
Equally exemplary was the High School Buddy Friends Group from Malacca that was also involved in last year's race. Twenty-seven-year-old Speedy said his team “couldn't get enough of the challenge and thus came back for more adventure.”

He added, “Compared to last year, this year's event seems more participant-friendly and we saw improvement, which is good.”

Carnival atmosphere complete with music and food
It was not only weekend warriors that got to derive enjoyment from the event; there were many who turned up just to soak in the carnival atmosphere. And of course, for them the other attractions—the food and music—helped make the event memorable. The unique sight of so many food trucks in one place alone must have excited many people, as did the Grilled Chicken with Firewood that was presented “tall tower and campfire style.”

Providing music entertainment were the Double Aze comprising Allan G. Murillon and Albert Sirimal, with their gentle harmonies and acoustic numbers. The other performer was vocalist June Wong who was accompanied by her keyboardist friend. With her smooth vocals, Wong easily got the crowd to sit back and relax as she delivered some contemporary numbers.

I also went to the Tribute to 4 Heavenly Kings, you can click on the link to view it.

Last Sunday dinner with friend Peggy, she is nephew's kaima. He's going to further study and work in China next month so she treats dinner at Shogun, Sunway Pyramid.

Then she bought toys for my sons at Toys R Us as my son promised to eat rice. She offers to buy him toys as knowing he doesn't like to eat rice at all. So he ate 3 spoonful of rice while crying.

Both sons so happy and have started playing their toys. Lego toys is the choice of my eldest son, while youngest son chosen the Dino Power Ranger toy.

We reached home late at night as the mall closed at 10pm and many people rushing back home on that hour. Usually my youngest would sleep at 8pm as he needs to wake up early for kindergarten next day.

Talking about toys, wanna know which toys auntie Peggy have bought them? Do click on the link to view it.

Posted by Sherry at 5:33 AM No comments: